This article first appeared on LinkedIn. It was created on, and shared from, Toyota’s Dynamic Signal platform.

Think about how you usually receive work-related news and announcements.

There’s email, from any number of sources.

Then, there are even more emails.

Hopefully you’re familiar with My Toolbox, too. And Driver’s Seat.

But it’s pretty fragmented. And frankly, sometimes, it can feel like a lot of noise.

Internal Communications Senior Manager Scott DeYager knew there had to be a better way, and he spent the last couple of years working on it: the new One Toyota communications platform.

“The original idea was to establish a platform where all our communications could live in one place,” says DeYager. “We wanted a mobile and desktop solution that provided engagement opportunities with commenting, liking and social sharing.”

DeYager partnered with a software company to design a platform and an app that met TMNA’s unique needs. He recruited a team of colleagues to work on the project. Together, they devised a gradual pillar-by-pillar rollout plan to team members – culminating with full adoption across TMNA just in time for the (postponed) 2020 Tokyo Olympic Games.

Then, COVID-19 happened. And everything changed.

“We’ve basically rolled out in six days what we had originally planned to rollout in six months,” says DeYager. “With the COVID-19 crisis, we decided to accelerate the launch and get as many team members on the One Toyota platform as soon as possible so we could provide all the content and information regarding the crisis in real time.” 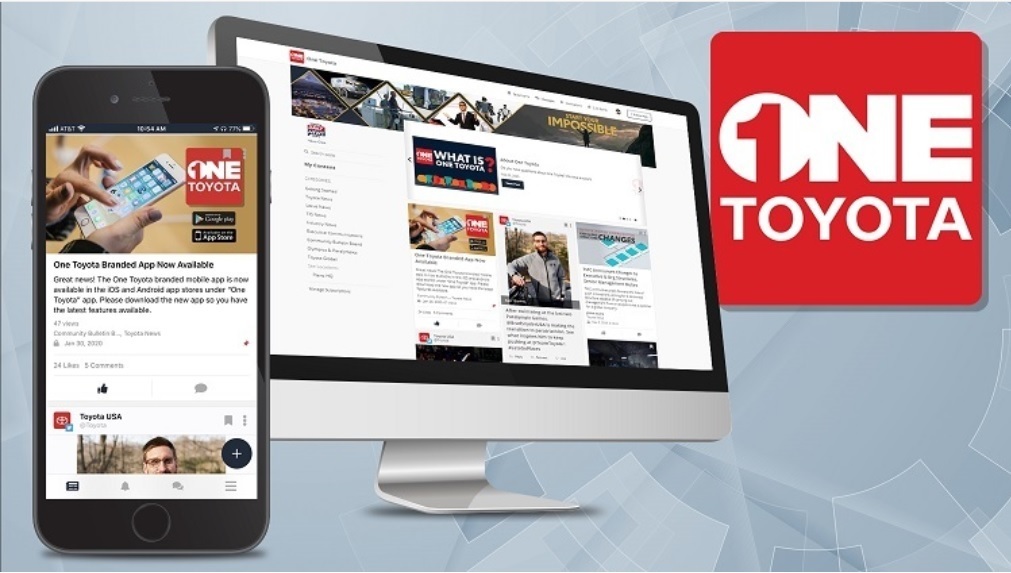 With TMNA offices and plants closed to all but the most business critical work – happening against the backdrop of a global health pandemic – team members urgently needed a singular voice communicating important news and announcements.

“The week of March 9, it became clear that the COVID-19 crisis was escalating, and we needed a way to communicate faster to everyone,” says Internal Communications Manager Karen Nielsen, who helped spearhead the One Toyota rollout. “We were close to onboarding the first group, the Corporate Resources pillar. That’s Chief Administrative Officer Chris Reynolds’ pillar. He and CEO Ted Ogawa have been our champions right from the start, because they could see the importance of being able to communicate easily across the enterprise.”

Because of the team’s advance preparation, they were well-positioned for an accelerated rollout. A run through with their vendor, Dynamic Signal, smoothed out most logistical issues.

“We had a run through with our vendor earlier in March so we were close to being ready,” says Nielsen. “But there were some technical issues we needed to work through to ensure team members could seamlessly register on the One Toyota platform,” she says. “Our technical architect and ITx teams – led by our ITx lead David Statham – worked through the weekend right before the launch to make sure everything was ready. Every day that week of March 16, we invited thousands of team members to the site. All without one support ticket until recently. So far, we only have three tickets total, which is amazing.”

Statham chalks the success up to an extensive piloting process, which began in May 2019 with 700 test users across the globe.

“Whenever possible, it’s wise to try out a tool before needing to use it,” says Statham. “For this program, we were able to get the input from different types of workers to study their challenges and see things from their perspective. We were able to identify issues early that could have been ‘blockers.’ For example, mobile logins were failing on the TFS network. The TFS IS team, with Microsoft, were able to get to the root cause and get it resolved before impacting team members.”

Now, there are more than 12,800 team members connected. The team is now focused on growing the community, sharing important news and boosting team member engagement. For DeYager, the experience underlined the importance of a critical Toyota cultural priority: making timely decisions.

“This accelerated rollout speaks to where we need to go as a company,” says DeYager. “Sometimes we just need to move quickly and accurately to drive our business forward.  It’s about trusting our instincts and doing what’s best for our team members.”

How Dynamic Signal Has Covered the COVID-19 Crisis

What Customers Say about Dynamic Signal During COVID-19

G.I. Sanders is Senior Director, Creative Services at Dynamic Signal. He specializes in entrepreneurship, digital and social media, design, and marketing. G.I. is based in Dallas, TX with his wife and two sons. Passions include technology, startups, music, fitness and sports.